Halloween at theme parks are one of the most popular events of the year, as the entire park transforms once a year, in order to be in the Halloween spirit.

In this page, we will go over the best theme park Halloween events in the U.S, what they offer, and why fans love them.

Universal's Halloween Horror Nights is one of the most anticipated and popular Halloween events in the world, that is a separately-ticketed event. Additionally, there are specific 'Scare Zones' designated around the park, with each zone being a completely different Halloween theme.

The park goes as far as to bring in specific food only during Halloween, most famously, their pizza fries.

Universal goes through tremendous lengths to provide visitors with almost a scary movie-feel throughout their visit, and it has paid off, as visitors eagerly await the return of Halloween Horror Nights every year.

Halloween Haunt is a limited time event that occurs around the Halloween season featuring Scare Zones, Haunted Houses, shows, and dozens of terrifying monsters strolling around the park.

It is included with general admission.

When night time begins, Halloween Haunt does as well.

During the day, visitors can experience the lighter side of Halloween season through the Great Pumpkin Fest, with many of the same night-time attractions and some not-so-scary daytime fun with the Peanuts Gang. Kids will be able to swing by dressed up in their halloween costumes and be able to trick or treat or even take part in the PEANUTS costume parade.

This halloween event occurs at the following parks: On top of all of this, there are dozens of monsters prowling the park.

As the sun goes down, the park transforms from Busch Gardens to Howl O Scream.

It is a separately-ticketed night event.

The unique aspects of Howl O Scream is that they offer a 'No Boo Necklace' and a 'Siren Bar' dedicated to Halloween.

If you're not the biggest fan of scare zones, you can purchase a 'No Boo' necklace for $15 (online or at any gift shop in Howl O Scream). This necklace will signify to all scarers that you are off-limits, and they are not allowed to scare you in any situation.

It's great because it allows you to still stay with you group (who may like being scared), without needing to sit out on the experience.

Fuel up on liquid courage at an ALL-NEW ghoulishly-themed outdoor bar! The Witch's Brew is a must-try drink. 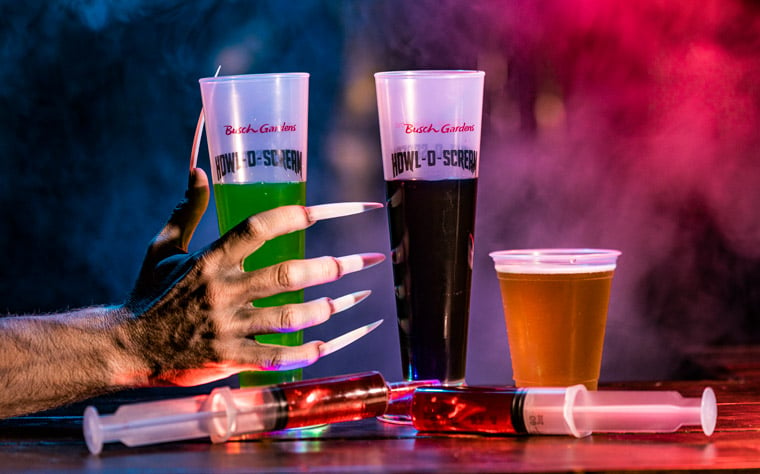 On your way to “The Forgotten” be sure to stop by and pick your poison from bewitching brews and cocktails served by sinister creatures of the dark. After all, our vampires prefer their victims with a little more flavor in their bloodstream.

This Halloween event takes place at the following theme parks:

Knott's Scary Farm is a limited time event that occurs around the Halloween season featuring Scare Zones, Haunted Houses, shows, and dozens of terrifying monsters strolling around the park.

It is a separately-ticketed event.

Similarly to Halloween Haunt, they also offer a Halloween event during the day, known as Knott's Spooky Farm.

Little ghouls can trick-or-treat around the town of Calico’s shops and buildings to collect sweet treats from the friendly townsfolk plus enjoy even more kids' Halloween activities. Families can join in on the Halloween fun as the park is transformed with themed décor and spooky surprises. The nice aspect of this event is that it is included with admission.

However, Haunted Houses are an additional cost (Add-on) which are sold separately from your park admission.

The Scare Zones are the most popular part of Fright Fest, as these specific zones contain less lighting, lots of fog, and is exactly where the 'monsters' (aka workers dressed up in scary costumes) walk up to you when you least expect it, to give you a scare! These zones are popular in all theme parks around Halloween season, as it's very unpredictable where these monsters will come from, leaving you in constant suspense.

Be prepared to hear screams in the scare zones!

Valley Scare is a limited time event that occurs around the Halloween season featuring 20+ rides, 6 mazes, 5 scare zones and 300 monsters prowling the park.

As the sun goes down, the park transforms from Valley Fair to Valley Scare. Although Valley Scare is tailored for those who crave thrills and scares, the park also offers other attractions in the daylight.

These attractions are designed for kids and adults who prefer a lighter dose of scares through the Great Pumpkin Fest. It is just an overall great place to celebrate Halloween, as they do a great job appealing to every age group during the day and night.

SCarowinds is a limited time event that occurs at Carowinds around the Halloween season featuring Scare Zones, Haunted Houses, shows, and dozens of terrifying monsters strolling around the park.

The best part about SCarowinds are the Haunted Houses.

These scary-themed houses/mazes are full of screams, thrills, and tons of fog where park-goers can enter. Upon seemingly every corner, there are scarers ready to greet you. On top of this, these houses are themed to be as scary as possible.

It's safe to say that haunted houses aren't for the faint of heart.

There is also typically very loud music playing to make it hard for visitors to be able to predict where the scarers are.

Kids will be able to swing by dressed up in their halloween costumes and be able to trick or treat or even take part in the PEANUTS costume parade. HalloWeekends is a limited time event that occurs in Cedar Point around the Halloween season featuring:

This is such a popular event that you'll want to consider purchasing a Fright Lane pass.

A Fright lane pass is essentially a Fast Lane pass that allows you to skip the lines at Cedar Point during the Halloween season.

HalloWeekends is a popular event that only occurs once a year, so naturally when it finally returns the crowd does as well.

If you hate waiting in lines, or just want to maximize your time, you will definitely want to consider a Fright lane pass.

You can purchase HalloWeekends Fright Lane tickets directly from the Cedar Point site.